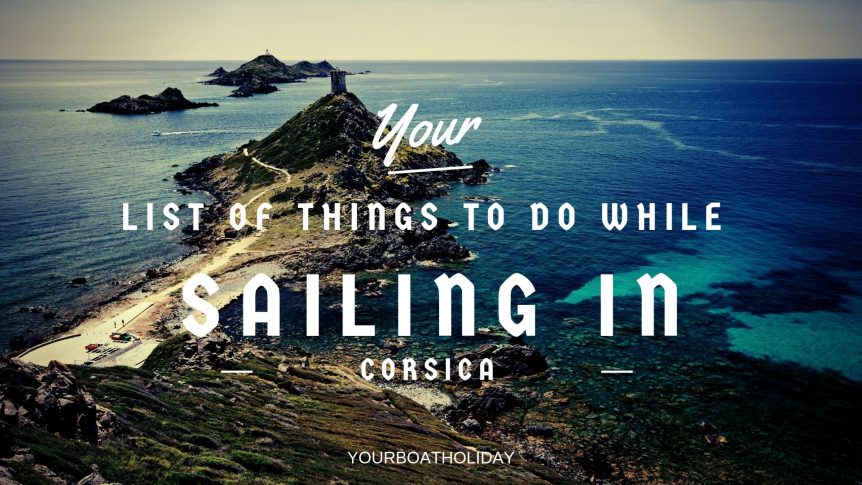 Sitting in the vicinity of both French and Italian mainlands, Corsica has been a witness to innumerable historical events dating from early 12th century. These monuments, thus, bear a resemblance to different European art forms spanning over centuries.

Sailing in Corsica ought to be about unravelling the history and unscathed beauty of such an unconventional place.

So, what will you discover while cruising around Corsica?

Calvi: It lies to the northwest of this island and is beautifully surrounded by a long rampart. A little below it lays a picturesque marina with decorative moorings.

This fifth largest commute of Corsica is known for its moderate to cold climate throughout the year with tourism as its main source of income. The chapel of Notre Dame de la Serra gives you a breathtaking sweeping view of the Bay of Calvi, thus, making it top the list of things to do in Calvi. Also, the beach of L’lle Rousse is just 20 minutes’ drive away with the clearest of water you can ever hope to find.

Girolata: At a distance of 20 nautical miles from Calvi is Girolata, which forms the next destination to get down at while cruising around Corsica. It is a remote village on the western coast. Being quite inaccessible, the only way you can enjoy its enthralling beauty is by voyaging to its port via a vessel. The best way is to hire a motorboat that can efficiently anchor on its small natural harbours.

This village covers the western part of Corsica National Park; so if you go a little inland, there’s a good chance to witness some exotic wildlife. Besides, the sea water is astonishingly clear, an evidence of least human interference. The place is also famous for the 16th-century battle fought among Ottoman, Spanish and Genoese ships in the Gulf of Girolata. When on a yacht charter in Corsica, do not miss a visit to this Mediterranean haven.

Ajaccio: With a population of about 50,000, Ajaccio is the Corsican capital. The mountainous range surrounding this town ensures a mild weather condition even during the colder months, making it one of the favourite spots when sailing in Corsica. Strolling through this old town’s lanes, you will find Napoleonic heritage, a significant museum worth exploring for its display of Napoleon Bonaparte’s origin, accumulations and heroics.

At 26 nautical miles from Cargese, this historical town comprises numerous pristine beaches with wide creeks while moving towards the sanguinary islands. This small archipelago guards the bay, forming a perfect spot to watch the crimson sunsets. It is also an active place for having fun and experimenting with water and adventure sports like hiking, mountain biking, climbing, trekking and many more.

Here, Cours Napoleon is a strikingly beautiful Church of Saint Rock that is built in the neoclassical style. Another monument worth a visit is the Ajaccio cathedral, famous for its painting ‘The Triumph of Religion’.

Bonifacio: A medieval town in Corsica, Bonifacio is perched on a high limestone cliff in the southern part of this island. The summer crowd almost spares it despite being home to sparkling Mediterranean waters and alleyways made of exquisite cobblestone.

No wonder the land is a tranquil haven for solitary sailing in Corsica! Book your vessel before the season begins.

SEND NOW YOUR ENQUIRY FOR SAILING IN CORSICA THIS SUMMER: