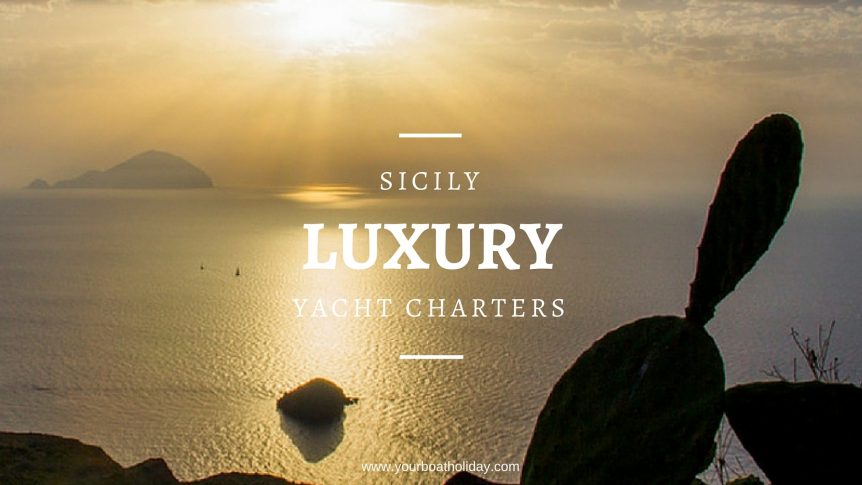 When you plan your  Sicily luxury yacht holidays, the ideal route is the one that leads you to the Aeolian Islands, the Sicilian archipelago that consists of seven islands, all beautiful, all to see. The islands are peaks emerged of a chain of volcanoes that stretches from the northern coast of Sicily up to 35 miles from it, at the center of a marine trench that reaches depths of 3,000 meters. Except Stromboli, the volcanoes are no more active,. All the Aeolian Islands Sicily are mountainous, very bumpy and instantly recognisable from afar.

Stromboli is the first of the Aeolian Islands that we meet coming down from the Amalfi Coast. It’s strongly recommended to not sail across Strombolicchio, as surrounded by rocky shoals.
The island is completely drenched by the Mediterranean atmosphere. The view of the volcano, the “Sciara del Fuoco” both by land and by sea, is the highlight of the island. Enjoy the Stromboli Night Tour by boat and watch the volcano lights up the night sky.

The point of berthing more comfortable is Cala Ficogrande. The two points of disembark of Scari and Ficogrande, are used exclusively for ferries and hydrofoils scheduled service, that connect Stromboli to Milazzo, the closest point on the north coast of Sicily, Stromboli with all the other Aeolian islands and Stromboli with Napoli. Instead you can do harbor not far from the “sbarcaderi” exclusively with winds breezes – from North West – and only with avowedly sunny weather. The anchorage, not far from the shore, is advised for sailing experts. Alternatively you can use the mooring buoys in service in the field Ficogrande. Unfortunately Stromboli island is without any shelter, so any kind of wind quickly becomes dangerous. in case of bad weather shelter it is located to nearby islands.

Panarea is known as the “Capri” of the Aeolian Islands. Panarea is cosy for sailors. Offers good shelters with winds both from West and North. The west coast falls into the sea with steep peaks, while the East side of Panarea offers a more accessible shore that sometimes opens to bays and inlets with the good anchors.

ANCHORS AND BUOY IN PANAREA
The best of Panarea‘s anchor is undoubtedly falls in Milazzo, a safe place with winds from the North and West with good sandy seabed and Posidonia. Adjacent Cala Milazzese, and not to be missed, Cala Junco, now a protected area due to archaeological findings. Cala della Nave, on the NW side of Panarea, is the only alternative with winds from the South. It is recognised by the big rock “La Nave” that protrudes about 100 meters from the island. The approach presents no danger, only the sandy seabed littered with volcanic slabs are very irregular. We recommend the use of a buoy.

Lipari is the capital of the Aeolian Islands: it’s the largest island, the most populous and the most equipped of the archipelago. And was also the first island to be inhabited, in fact the first inhabitants of the archipelago settled on Castle Hill, around which has developed following the beautiful country of Lipari. Lipari is an extremely pleasant and charming stopover with its narrow streets that climb to the castle built in the sixteenth century. The biggest and most equipped island of the archipelago, Lipari is the main port of all the Aeolian Islands. It also offers many opportunities for anchoring and shelters. The North and East Coasts are safe anywhere, while the West and South West has some rocks. Do not miss Canneto, the pumice quarry and Acquacalda.

PORTS AND ANCHORS IN LIPARI

The ports of Lipari are Lipari Service at Marina Lunga,, Pignataro and Sottomonastero. One beside the other, the ports are always very crowded during the high season. Completely exposed to winds from the 1st and 2nd quadrant.
Pignataro: North located on the far side of the bay, is sheltered by a crank arm for WSW oriented addition to a private marina, you can find a place alongside the vessels.
Marina Lunga is dotted with floating docks with mooring facilities, water and light. In this port you can refueling and water.
Sottomonastero: it is the natural continuation of the bay of Marina Lunga, that after the ports of the hydrofoils continues with the quay area and offers additional berths with mooring service, electricity and water.
It’s also possible to anchor at Sottomonastero or at Marina Corta.

Salina is the highest on the sea level, about 960 mt. The island is formed by two connected peaks and is also the greenest of the Aeolian Islands. Springboard for Filicudi, but also the island after Lipari which offers a quiet night in the port, if you are lucky and if you are out of season. Here you can refuel, both water and fuel. It takes its name from the ancient salt mines, now completely abandoned but still visible in Punta Lingua, South East part of Salina.

ANCHORS AND PORTS IN SALINA

The Ports: S. Marina Salina (Eastern side) and Rinella (Southern side). The first one is the most important port of the island, at the end of the main village of the island of Salina. It is divided into two docks, one reserved exclusively for pleasure boats no longer than 15 meters, the other is adjacent to the North dock, where you can also refuel and water. Here there are also ferry boats and hydrofoils that connect Salina and the other Aeolian Islands, with Naples and Milazzo.
Rinella has instead turned into a natural inlet port due to a pier that starts from the shore and stretches westward. A good shelter from the winds of the 1st and 2nd quadrant, but completely exposed to south winds. You can moor at the dock only if it is not scheduled tthe ferry’s arrival.

Not to be missed Pollara, near Punta Perciato, NW of Salina. The big stack is surrounded by dry areas and access to the bay is exclusively from the North side. Good shelter with winds from the NE. Also Punta Lingua deserve a stopover. The South Eastern part of Salina is a pleasant and quiet stop, and a good shelter from the winds of West. The best anchorage is in front of the beach.

Vulcano, is less than 12 miles from the northern coast of Sicily. It’s formed by several volcanoes, including the highest – the Great Crater – overlooking the harbor. The last eruption completely destroyed the village, but today the volcanic activity is limited to fumaroles, in hot sulfur springs and submarine pools of hot gases that heat in some places the marine waters. From the sea, Vulcan offers fantastic views of rugged and multicolored coastlines. Coming from West or from East, Vulcanello seems like a small island of Vulcano and Lipari. It is actually a sandy isthmus that joins Volcano, whence the only safe bays of the island: Porto Ponente and Porto Levante. The hot springs and the natural pool of sulfurous sludge that is in the immediate vicinity of the port.

PORTS AND ANCHORAGES OF VOLCANO
The island of Vulcano has only one landing place, even if improperly the two harbours at its disposal are called Porto di Levante and Porto di Ponente.
Porto Levante, sheltered from winds from the West, is the main port of the island where the ferries that connect Vulcano with the other the Aeolian islands, with Milazzo and Naples.
Porto di Ponente, sheltered from winds from the East, is just a cove with good anchorage on the bottom of stones. Pay attention to the rocky shallows protruding from the Northern coast and the coast on the Eastern side of the bay.

Filicudi is 10 miles away towards West from Salina. It has a prolonged cone shape towards South East (Capo Graziano) that connects to the main building with a low plain (Piana del Porto). The coasts of Filicudi are steep, almost everywhere deserted and difficult to access. They offer no safe haven, since the port bay is sheltered only by the winds from the South West. The coasts are surrounded by shoals and dangerous rocks, so be careful and always consult the charts. Proceeding towards West, we crossed the port of Pecorini, picturesque village. The place is quaint, but you can only stop in good weather, as the depth increases very sharply to sea as soon as we deviate from the shore. Proceeding northwards, we cross the characteristic rock group La Canna and Montenassari. Not to be missed the Grotta del Bue Marino

Another ten miles towards West from Filicudi, to discover the island of Alicudi, a regular cone tall and dark. Some small houses scattered on the terraced crops appear on the SE side, while elsewhere the island is deserted. One fallback is navigate to Lipari and Salina for safe shelters. The only point of berthing in Alicudi is a small pier on the SE side of the island. It can give the bottom before the beach of Alicudi paying close attention to the depth of the highly irregular seabed.