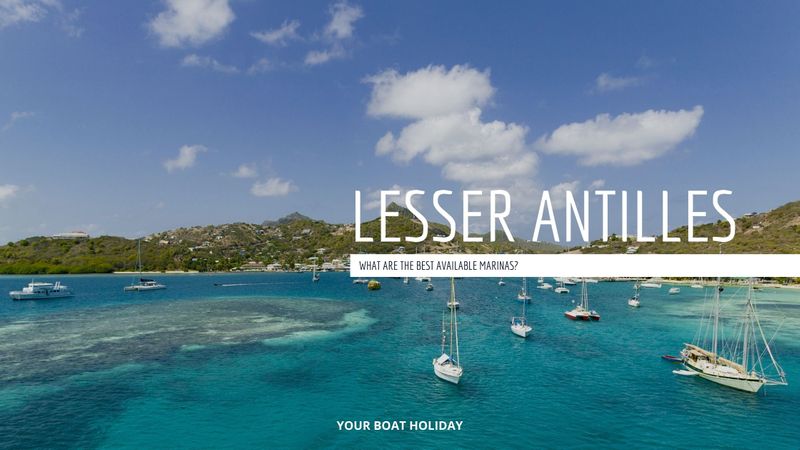 Guadeloupe, Dominica, Martinique, Saint Lucia, Saint Vincent. These 5 islands make up a large part of the Lesser Antilles and are the main tourist destinations for yachtsmen who love sailing, cruises, and organized trips.

CONTACT US FOR YOUR CHARTER IN THE LESSER ANTILLES 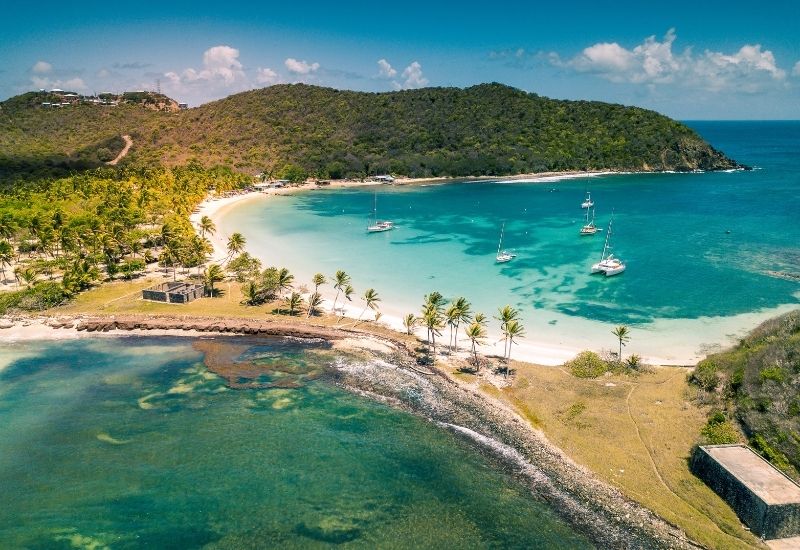 In this article we briefly list the characteristics of each, highlighting the main marinas from which to set sail or find refuge during a boat trip.

Which are the main ports for the Lesser Antilles?

Here, then, listed from north to south, each island, and its marinas: 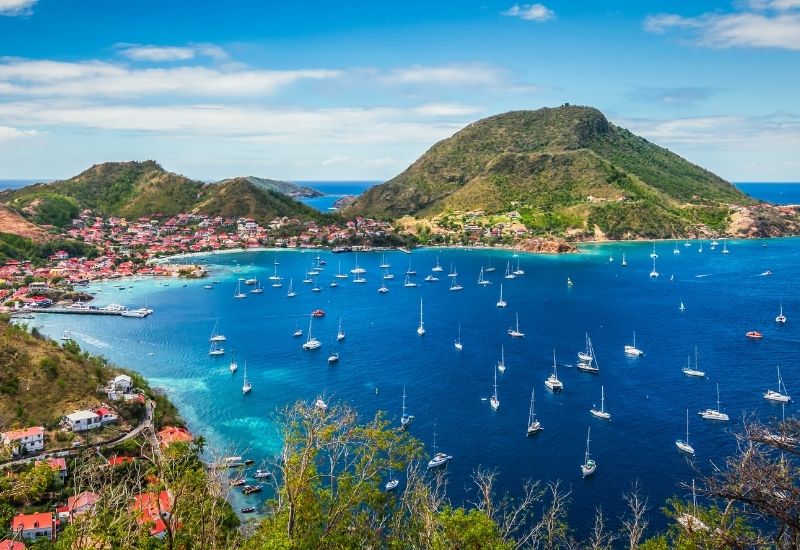 Among the most popular Caribbean destinations, Guadeloupe offers a perfect balance between wild and unspoiled nature, the absolute protagonist, and magnificent beaches among the most beautiful of the lesser Antilles. Among the many, we point out La Caravelle, a painted landscape with crystalline and turquoise waters, typical of the Caribbean Sea, and sand that gives different shades from pure white to golden.

Today Guadeloupe is part, like Martinique, of the French overseas territories.

Being formally French territory, Guadeloupe is well connected with France through several direct flights to and from Paris. The island’s international airport, not far from Pointe-à-Pitre, the capital, also allows direct air connections with North America as well as with the other major Caribbean islands. 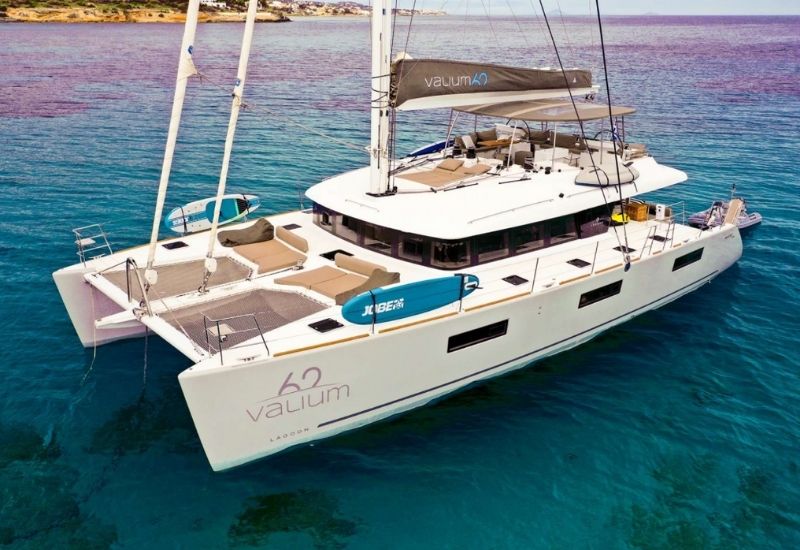 Guadeloupe is geographically and administratively divided into two areas, Grande-Terre and Basse-Terre, which meet at Pointe-à-Pitre, the largest city on the island.

In the Grande-Terre area, in the eastern part of the island, there is the Yacht Club de Saint François, located about 36 km from Pointe-à-Pitre and equipped with 50 berths. 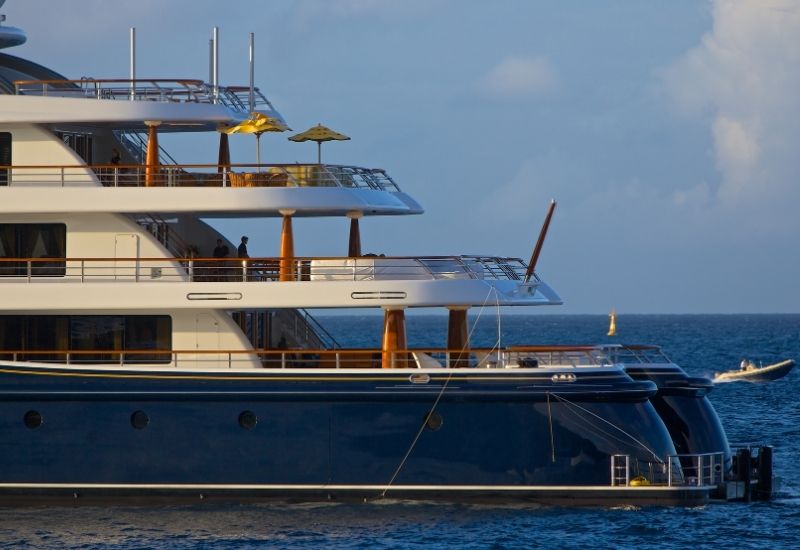 The island of Dominica is the least frequented by tourists also and above all because it cannot boast the classic beautiful Caribbean white sand beaches that attract the attention of travelers from all over the world.

The island’s interest is linked to sports activities and makes it a suitable destination for those looking for sports holidays such as trekking, diving, and snorkeling.

Endowed with an enviable natural landscape, Dominica has a wonderful hinterland with rainforests, lakes, thermal springs, and more than 200 rivers, all to be discovered strictly on foot armed with boots and adventure desire. 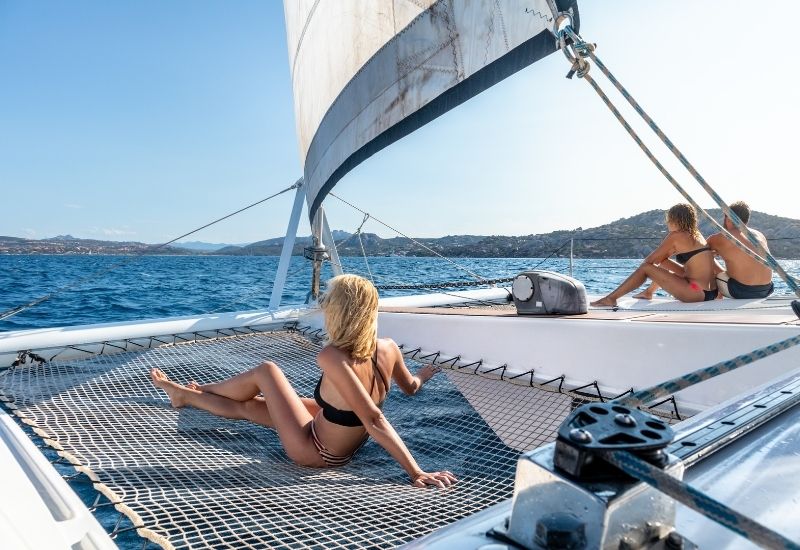 Although the island has two airports, Canefield, not far from the city of Roseau, and Melville Hall, in the northeastern part, it is not possible to reach it directly from either Europe or North America. Therefore it is necessary to make a stop in one of the other Caribbean islands of the lesser Antilles.

Due to its very nature, Dominica is not provided by real marinas. Our advice is to plan your visit using the nearby islands of Guadeloupe to the north and Martinique to the south as points of reference for your stops. 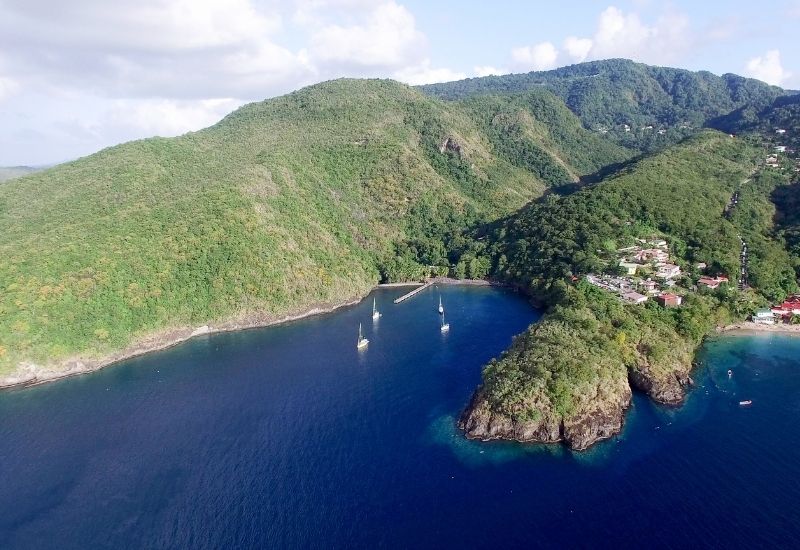 This volcanic island has always been a mixture of different peoples and cultures resulting from different occupations that have followed one another over the centuries. The approximately 400,000 inhabitants have European, African, and Indian derivations with their own ways of life very rich in diversity with many contradictions, but at the same time also joyful and very welcoming.

Today Martinique is part of the overseas territories of France, the official language is French and the Euro is its valid currency. 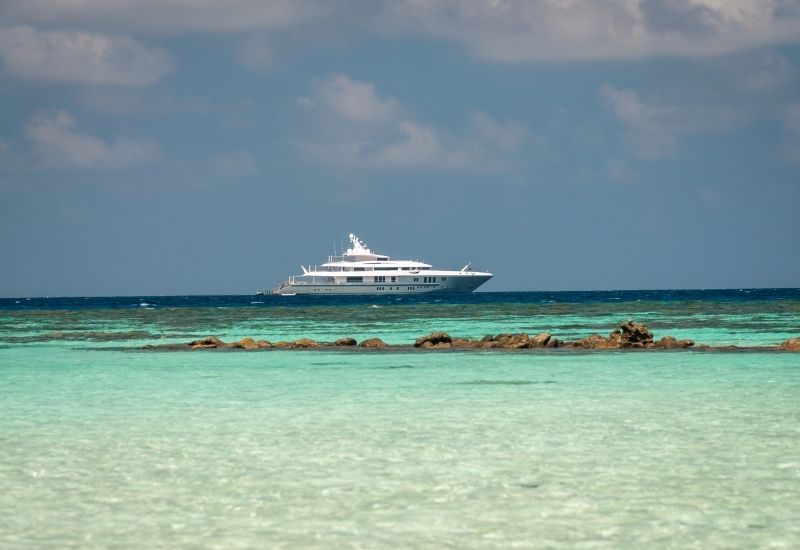 It is possible to arrive here by air with direct flights from Paris and North America. The island Lamentin International Airport is located close to the capital, Fort-de-France.

Marina du Marin, located in the south of the island, is the largest marina in Martinique and one of the largest in the Caribbean. It offers its customers 830 berths for boats up to 60 meters in length and a maximum draft of 4.8 meters. The property offers a complete package of services including restaurants, shops, and a team at your disposal 7 days a week.

There are two other small marinas, Marina Pointe Du Bout, located in the Fort de France bay on the west coast, and Marina du Robert, on the east coast which however have a limited number of berths for small boats. 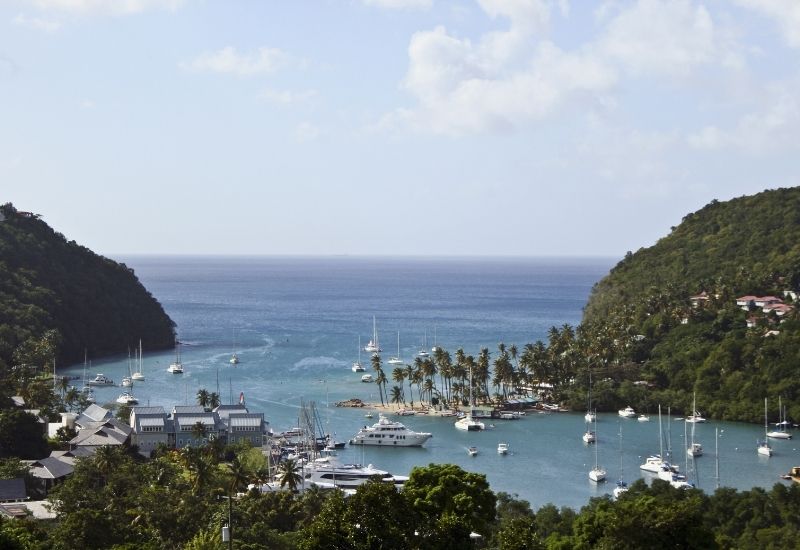 Saint Lucia is one of the eight independent islands of the Lesser Antilles and among its countless points of interest, you can’t miss the Piton mountains. Located southwest, these two mountains have become the island symbol worldwide. Although roughly only 800 meters high, their triangle shape has become iconic and panoramic. If you are a trekking lover, you cannot miss a walk among their paths, winding through the jungle of these two peaks. 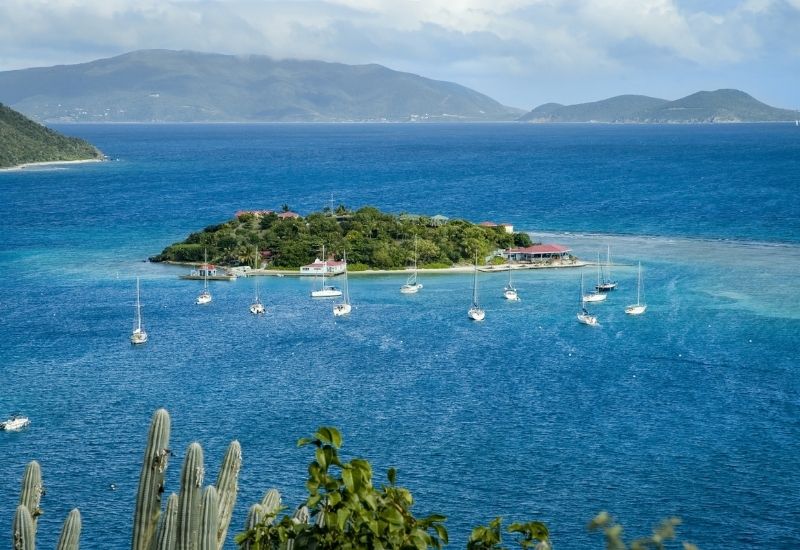 The main tourist ports of Saint Lucia are 3 and they are all located in the northwestern part of the island. Capella Marigot Bay Marina, near Castries, the capital, is a luxurious port with 40 berths also for large boats, up to 85 meters in length.

Further north, in Rodney Bay, Rodney Bay Marina and Island Water World are within easy reach, both with 50 berths available. 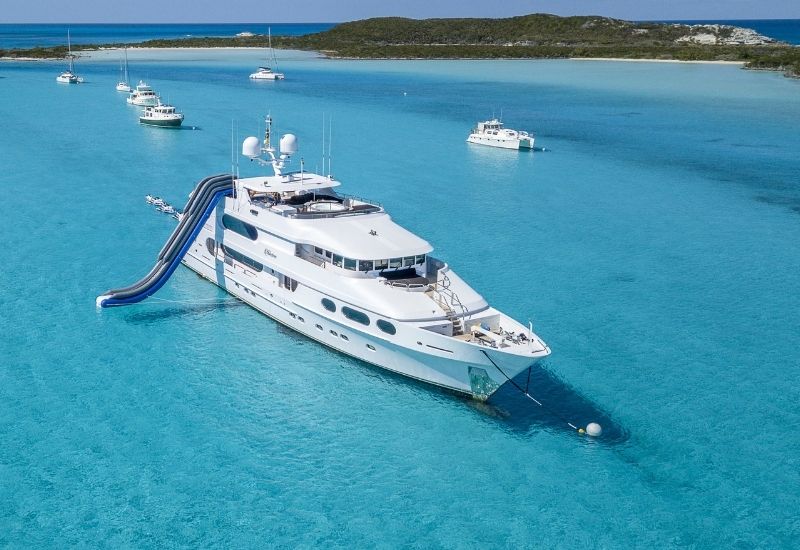 Saint Vincent and the Grenadines

It is an archipelago made of 32 islands, most of which small and sparsely populated.

They are located between the islands of Santa Lucia and Grenada and are historically part of the British Empire as an English colony of the “Little Antilles”. They have been independent since 1961 but still part of the Commonwealth.

The official language is English but some local dialects deriving from French are also spoken. 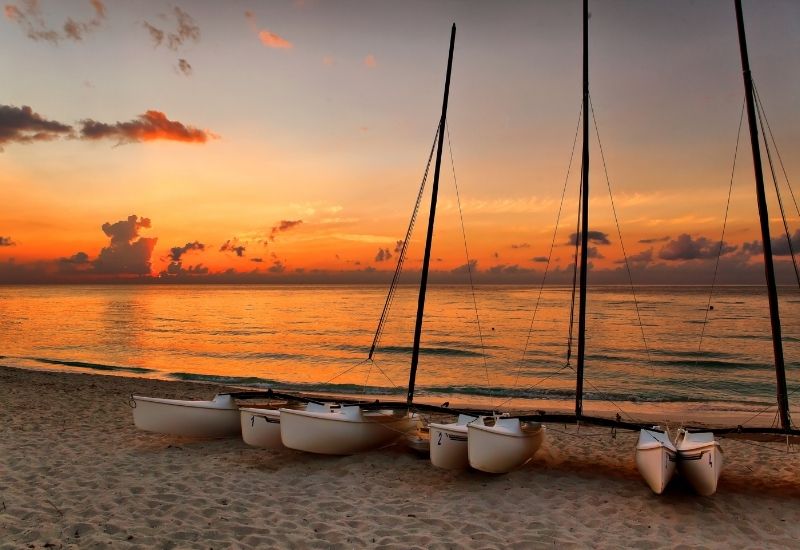 The main airport is located on the main island, Saint Vincent, and is the Joshua Arnos Vale, located a short distance from Kingstown, the capital.

The airport serves international flights to and from the UK and North America.

The main tourist port of the island is located in its extreme south, not far from Arnos Vale airport. Blue Lagoon Marina is small (only 20 berths) but very well served with a customs and immigration office open 7 days a week. On request, it is also possible to stay overnight in the partner hotel.

What could be a possible 7-days boat itinerary to find out about the Florida Keys?

The Best Marinas in Lesser Antilles? Sail between Guadalupe, Martinique and Saint Lucia!

Is it possible to organize a sailing trip to British Virgin Islands despite the restrictions due to the pandemic?