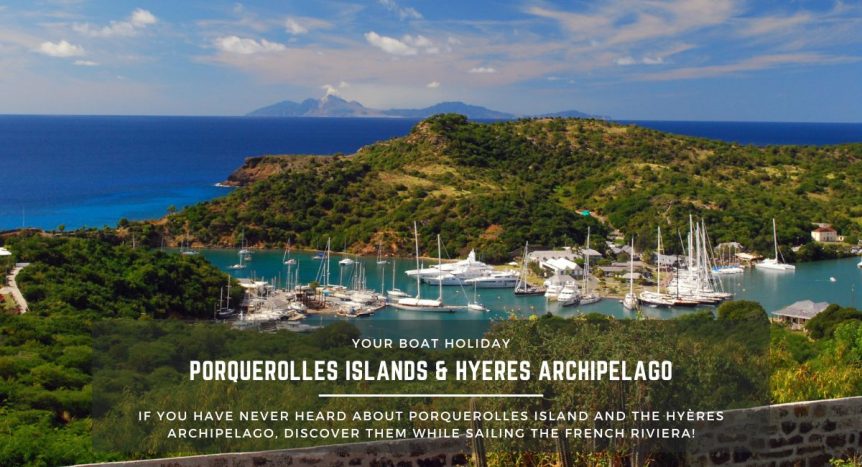 An unspoiled paradise just minutes from the French Riviera. This is what we talk about when we mention Porquerolles Island, a pristine environment that is worth discovering while sailing your charter boat along the beautiful french coast.

Refuge for writers and artists searching for inspiration, Ile de Porquerolles is the most famous and visited of the islands that make up the Hyères archipelago, consisting of three major islands and a series of islets.

These strips of land in the middle of the French sea are characterized by unspoiled nature, very seriously preserved by its inhabitants.

The Hyères Islands, also called Golden Islands, are Porquerolles, Port-Cros, and Ile du Levant. Porquerolles is the main tourist center, the island du Levant is the largest and is home to a famous naturist village, while Port-Cros has been declared a national park and marine reserve.

BOOK NOW YOUR CHARTER IN THE SOUTH OF FRANCE

Where exactly are these islands located?

Located off the Mediterranean coast of France, between Toulon and Saint Tropez, the archipelago of Hyères can be easily reached in a few minutes by boat from the leading marinas in the area.

Porquerolles is the largest island, has an arch shape, and measures seven kilometers in length by three in width. A paradise where nature reigns supreme and where cars are prohibited.

The island of Port-Cros owes its name to a small port in the shape of a cross. It was donated to the French government by its last owner to establish a national park there.

Levant island, on the other hand, is partly owned by the French navy, an area therefore inaccessible, and partly by the naturist village of Héliopolis. The coast offers some coves and two beaches, Plage Les Grottes (where naturism is mandatory) and Plage de Sable Levant.

All this is just a few minutes by yacht from the Côte d’Azur.

Related: How much does a South of France yacht charter vacation cost?

Porquerolles is a small corner of paradise with dream beaches, where nature is preserved thanks to strict environmental protection standards. The only noises are those of cicadas, the rustle of the wind, and the waves crashing on the rocks.

According to reports, the island was bought in 1912 by the Belgian entrepreneur François Joseph Fournier as a wedding gift for his wife. Later he had 500 acres of vineyards planted, which produced one of the first wines of Provence, vin des Côtes de Provence.

Ile de Porquerolles is characterized by both indented coasts full of coves and sandy beaches with turquoise waters.

On the north coast, the landscape is sweeter, there are many white sand beaches and pine forests that reach the sea, blue and clear like few other places in the Mediterranean Sea. The southern side of the island, on the other hand, is more rugged and wild, with cliffs and small coves that can only be reached by boat or through inaccessible paths.

From the coast, it is also possible to follow various trekking routes towards the hinterland, which is rich in hills, or set out to discover the remains of old defensive military fortresses.

The village of Porquerolles, founded in 1820, is a typical small village.

Among the best beaches to visit, we recommend of Notre Dame, one of the most beautiful beaches on the island of Porquerolles. The Plage d’Argent, on the other hand, is the only beach with a kiosk where you can buy food and drinks. Continuing, among the wildest beaches, we find that of Du Langoustier.

If you find yourself near the town, the De la Courtade beach is the largest of the Porquerolles beaches and can be reached on foot or by bicycle in a few minutes.

Recommended: Top haute cuisine restaurants to visit by yacht in the South of France

One of the most well-protected environments in the world!

The island of Porquerolles is part of the Port-Cros National Park. It is undoubtedly one of the most protected places in the world from an environmental point of view, therefore highly protected by law in many ways. In fact, on the island, it is forbidden to circulate with cars; it is forbidden to build, camp, and even smoke outdoors.

These strict rules have the sole purpose of keeping its delicate ecosystem as intact as possible and making it possible to maintain one of the fascinating landscapes of the Mediterranean unchanged, safeguarding it from the risks of unbridled mass tourism and the danger of fires.

Related: Luxury yachts over 40 meters with jacuzzi for charter in the South of France

You can contact us by email at ask@yourboatholiday.com or by phone, calling +39 33436 00997; also available on WhatsApp for both calls and texting.

5 Things to do in Antigua during your yacht charter vacation