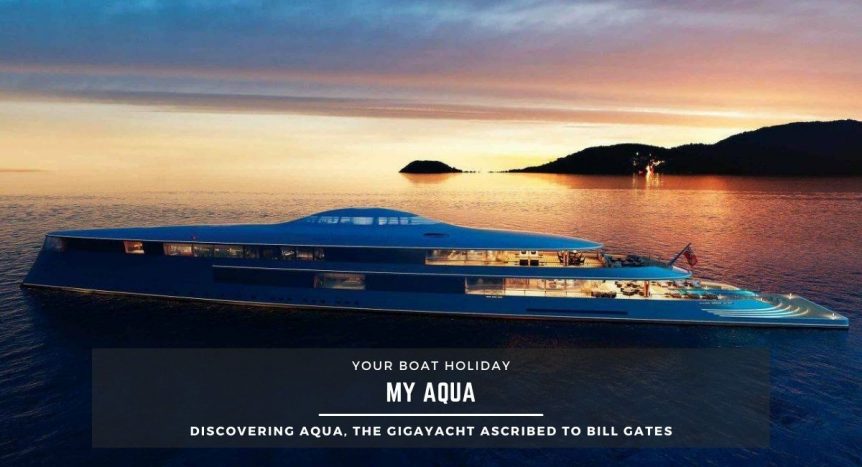 Just a concept, at least for now, but which according to the manufacturer’s forecasts will soon become reality. This is Acqua, the hydrogen-powered superyacht that was unveiled to the public at the Monaco Yacht Show 2019 and which, according to Dutch design studio Sinot, will become reality by 2024.

At an estimated cost of 500 million pounds (over 590 million euros), the Aqua yacht is therefore a reality that will materialize in the coming years.

She is 112 meters long and capable of reaching 17 knots. You will be equipped with five decks in which an infinity pool with waterfall, a solarium, spa and gym, massage room and a helipad will be meticulously inserted. She will be powered by hydrogen and will provide ample space for 14 guests and up to 31 crew members.

What is the connection between the Aqua yacht and Bill Gates?

To carry out a project of such proportions, in addition to a great imagination, a considerable technical and vision capacity on the part of the builder, also and above all huge capital, as well as the courage and passion of a true entrepreneur are required.

Here, therefore, is a first explanation as to why the name of the father of Microsoft, the magnate, among the richest men on the planet, Bill Gates, has been linked to the creation of Aqua, of whom, in the past, it has been said that he was very interested in ‘purchase of this pioneering boat and that he had even already ordered one for himself.

Furthermore, the fact that she is 100% ecological is another important clue that linked Gates to the project. Indeed, the tycoon’s growing sensitivity towards environmental issues and the protection of the planet is not a mystery.

In reality, as explained immediately by the Dutch designers of Sinot Yacht Architecture and Design, the purchase of the Aqa yacht by Bill Gates is just an urban legend.

The media hype was therefore quickly subsided, but it nevertheless generated great interest in the brand new and very advanced vessel while the founder of Microsoft, a regular in charter travel in the Mediterranean Sea, will probably continue to rent yachts seasonally, as he has done so far (some names excellent as Alfa Nero, Serene and Octopus).

Recommended: Beyoncé and Jay-Z aboard one of the most expensive charter yachts in the world

The prototype presented in Munich, as we said, is powered by a system that uses liquefied hydrogen, stored in the hold at -253 degrees in two sealed tanks of 28 tons each.

According to its creators it will be able to reach a speed of 17 knots, about 34 km per hour (an excellent pace when compared to conventional yachts) and will not release polluting emissions into the environment, but only water.

The plant will produce the power necessary to give life to the two electric motors of one megawatt each, which will transmit energy to the propellers, generating the motion (the motors will be hybrid and therefore, for any eventuality, there will also be a possible power supply diesel).

The hydrogen will be stored at very low temperatures in vacuum tanks and fuel cells with a proton exchange membrane carry out the conversion from liquid hydrogen into electrical energy. The electricity generated in this way will be transmitted to the control unit which in turn will distribute it to power the propulsion, on-board systems and sumptuous on-board services.

On Board the Aqua superyacht

Thanks to the electric propulsion, Aqua is designed to offer extremely calm navigation and guarantee a formidable range of 3750 nautical miles.

The innovations with which you are equipped certainly do not stop at the engine room. The suites, located in the front half of the upper deck, develop in a single open space with interconnected spaces, divided only by finely worked wooden walls.

Large windows run from floor to ceiling offering breathtaking views and favoring the diffusion of natural light. The owner’s suite is located at the head of his rooms along the axis of the yacht and offers a view that opens onto the horizon at the bow. A large bathroom, a walk-in closet and a private spa complete the furnishings.

Below the sun loungers, near the waterline, are the large VIP cabins, which are characterized by their spacious design and very elaborate furnishings. All guest cabins are designed to offer openness, luxury and comfort, conveying the utmost sense of freedom in a highly detailed Japanese-style minimalist setting.

The indoor spa and wellness center are designed with a hydromassage room, a yoga space and one dedicated to training, with a huge window inserted into the hull that looks out over the ocean surface.

One of Aqua’s most characteristic and distinctive features is the spiral staircase located in the center of the yacht which winds from the upper deck to the lower one, where the two large liquefied hydrogen tanks reveal their structure behind a gigantic reinforced glass facade.

Not to be missed: Yacht Necker Belle formerly owned by Richard Branson