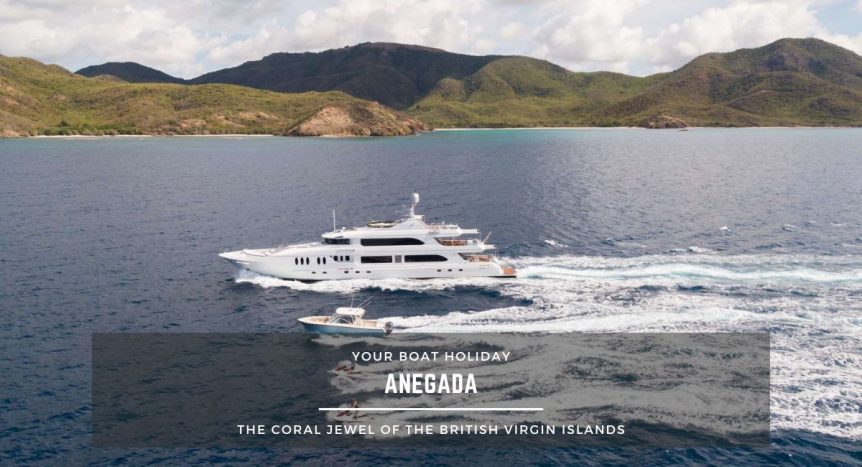 The only coral island in the volcanic chain of the Virgin Islands, about 20 kilometers northeast of Virgin Gorda. This is the island of Anegada, an exotic destination characterized by a very low altitude, which almost borders on sea level, by the fantastic coral reefs surrounding it, the beautiful secluded beaches, and by clear springs that bubble on the seabed.

Traditionally a distant and hidden gem for boaters sailing the waters of the British Virgin Islands, in recent years, the island has undergone a slight transformation, with the development of some (albeit still very limited) tourist activities.

Anegada means “submerged,” The explanation lies in that the island has a maximum height of 8 meters above sea level. It is no coincidence that it is the only coral atoll of the Virgin Islands, where the only inhabitants, in addition to the few residents, are iguanas and flamingos.

In short, this place is suitable for those seeking peace and tranquility in a unique context.

The island’s inhabitants are grouped in “The Settlement,” a handful of extremely simple wooden houses in the southeast. Despite being the second largest island of the archipelago, Anegada is inhabited by only about 300 permanent residents, which makes the environment very relaxed.

Setting Point is Anegada’s only mooring point. Thanks to its convenient location, major hotels and restaurants have established their headquarters in its immediate vicinity.

Along the main street, it is possible to find shops, a small supermarket and a few other places such as car, bicycle or scooter hirers.

The Settlement has a modest air taxi runway that offers hyperlocal flights between islands. Tortola’s Terrance B. Lettsome International Airport is, therefore, a mandatory stopover to arrive here after setting sail on board your charter yacht.

What makes this island so unique?

Anegada’s waters are famous both for the abundance of lobsters and for the numerous wrecks of Spanish galleons that lie on the seabed and which represent a real challenge for snorkeling and scuba diving enthusiasts.

Over the years, numerous rumors of fabulous underwater treasures inside the wrecks have attracted and still attract people from all over the world. However, only a few doubloons have been found so far.

In recent centuries, the island’s fame has long been marked by a practically infinite series of accidents involving boats that were unable to spot the island in time due to its conformation, so low above sea level that it turned out to be a trap. It is precise because of these incidents that the island today has become a destination known worldwide. The most popular dives are, by far, those that allow you to reach the wrecks of the British steamer Parramatta or the HMS Astrea, an English frigate equipped with cannons.

Several wild florae thrive here, among which frangipani, turpentine trees, sea lavender, and wild orchids stand out. As for the endemic fauna, Anegada is home to the rocky iguana, whose population is declining due to the degradation of their habitat caused by human activities.

Another species native to the Caribbean and also found in the salt lakes of Anegada are flamingos. During an excursion to Flamingo Pond, it is possible to admire from afar, thanks to binoculars and telescopes, these beautiful, shy, and elegant birds.

Life also abounds in the many mazes, tunnels, and reefs rich in bony fish, rays, parrot fish, and many other species.

The last peculiarity worth mentioning about this extraordinary island is the shells. At the eastern end of Anegada, many thousands of shells, rough and grainy on the outside but bright and smooth on the inside, remind the visitor of the importance of this biological structure in the ecosystem of these areas.

The beaches remain the most crucial attraction of Anegada, and is one of the two main attractions on the north coast. Here, kilometers of white sand stretch as far as the eye can see, and the Big Bamboo Bar is the perfect place to take a break.

Pomato Point, on the south coast of the West End, is a haven of tranquility between its white sand and blue sea. Not far away, but on the north coast of the West End, the other beach that attracts many visitors is Cow Wreck Beach. Here, too, the white beach and a crystalline sea are the real protagonists, but where it is also possible to rent a kayak for an excursion in the sea or go snorkeling. The extraordinary view and delicious food and drink make this place one of the best on the island.

The other East End beach is Flash of Beauty, immediately east of Loblolly Beach and ideal for reef diving.

You can contact us by email at ask@yourboatholiday.com or by phone, calling +39 33436 00997; also available on WhatsApp for both calls and texting.