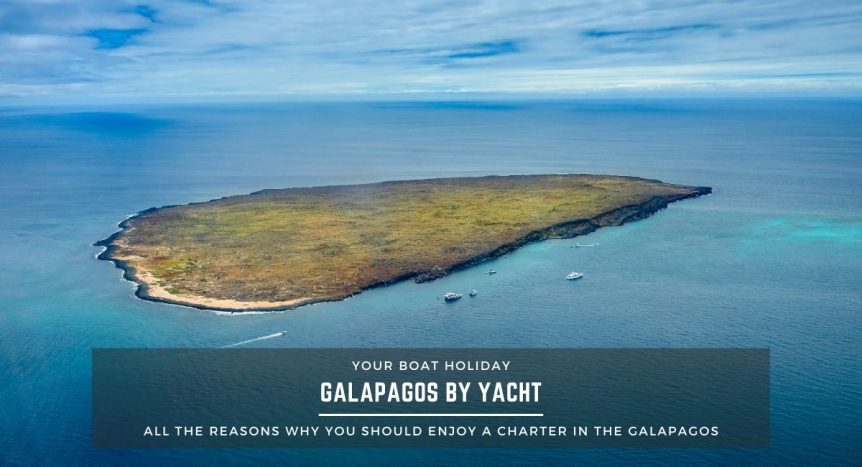 The Galapagos Islands became famous thanks to the research of the well-known scholar Charles Darwin, who conducted studies on the local fauna here and drew the basis for formulating his theory of evolution, today the Galapagos Islands are also known for their natural beauty and enchanting landscapes. Admiring the local fauna and flora is truly an incredible sight. Not surprisingly, there are thousands of tourists who decide to spend their holidays in the Galapagos and even the pleasure boating tourism is gaining more and more interest even in a remote but exceptionally attractive location like this one.

Exactly 100 years after Darwin’s visit, the government of Ecuador decided to transform much of the Galapagos into a wildlife sanctuary, which later became the Galapagos National Park. Since then it has been designated as an important World Heritage Site also by UNESCO, thus guaranteeing the protection of its fauna and the incredible natural beauty of this archipelago on an international level.

Due to its location far from the canonical charter travel routes (all of the Bahamas and the Caribbean), finding a yacht available for charter in this remote region is not always easy, however, the market is gradually gaining ground in this corner of the world as well. More and more nautical charter brokers are taking an interest in this exotic destination, especially exploiting the possibility of accessing it by passing through the Panama Canal, relatively close to other well-known and sought-after destinations such as Costa Rica and Belize.

BOOK NOW YOUR CHARTER IN THE GALAPAGOS

Where are the exotic Galapagos located?

The Galapagos Islands are located in the Pacific Ocean, straddling the equator. They are about 1000 kilometers from the coast of Ecuador, the country to which they administratively belong. To reach them you must necessarily fly from Quito or Guayaquil, there is no other way. In fact, there are no direct flights from other countries or ferries from Ecuador.

The Galapagos is an archipelago made up of 13 islands. These islands are divided into 7 called major and other 6 called minor.

How to reach this archipelago?

As we said, it is not possible to reach the Galapagos with a direct flight that does not come from Ecuador. To reach this South American country, the main flights from Europe come from Amsterdam or Paris. Starting from these European cities it is possible to reach the destination after about 15 hours of flight. Available flights are operated by airlines such as Air France, KLM, or even Lufthansa.

What Are The Reasons Why You Should Plan Your Next Galapagos Boat Charter Trip?

From diving with hammerhead sharks and multicolored fish to hiking through wild and brutal landscapes to the whitest beaches you’ve ever seen, these islands offer incredibly unique experiences that literally can’t be found anywhere else. The following are the main reasons why you should consider the Galapagos as your next Charter boat trip:

A perfect archipelago to sail freely

As already mentioned, the Galapagos is an archipelago of 13 main islands, with 6 smaller islands and over 100 islets, each with its own unique characteristics. Here is a small description of the best known:

San Cristobal: perhaps it can be defined as the main island of the South American archipelago. On this island, there is the Galapagos airport and also the most important city center, namely Puerto Baquerizo Moreno. The island of San Cristobal is so-called because it was dedicated to the figure of Christopher Columbus.

Isabela: this is the largest island of the Galapagos archipelago, characterized by an iconic seahorse shape. Isabela stretches from north to south for 75 miles (120 km) and is home to five active volcanoes, including the mighty Sierra Negra, where it is even possible to trek over relatively recent lava flows. The highest point of this island is the Wolf volcano, which is about 1,700 meters high above sea level.

On the island, it is possible to find exceptional specimens unique in the world, such as the well-known Darwin’s finches, and thanks to its rich vegetation, Isabela is home to the largest number of giant tortoises compared to all the other islands combined, as well as numerous marine mammals, including humpback whales, sperm whales, and killer whales, as well as dolphins and a host of bird species.

Santiago is another island known to visitors. Located north of Santa Cruz, it has a rich history of whaling and salt mining. Tourists flock to Sullivan’s Bay in the southeast, where it is possible to traverse recent lava flows and observe its unique features. The island also boasts a number of outstanding dive sites, including Cousins ​​Rocks, Beagle Rocks, and Albany Islet.

Espanola, on the other hand, is the oldest island in the archipelago. In fact, it is estimated to be four million years old and that it is the result of a shield volcano, which has since eroded over time to become one of the flattest islands in the cluster and one of the most remote. Due to its great distance from the other islands, it has several endemic species.

Baltra: island on which there is the second most important airport of the Galapagos Islands. The origin of the name of this island is not certain, but it is believed to derive from some native word of the Ecuadorian territory.

The main attractions of the Galapagos are Nature and animals. Here you will be able to see many animal species that are not found anywhere else in the world!

Just think that about 80% of terrestrial birds, 97% of reptiles and terrestrial mammals, more than 20% of marine species, and over 30% of plants are endemic, that is, exclusive to this place.

Just to name a few: the giant Galapagos tortoise, the marine iguana, the terrified cormorant, and the Galapagos penguin, the only species of penguin found in the northern hemisphere.

The islands boast a number of highly coveted diving spots, considered among the best in the world for scuba diving thanks to the spectacular fish species that flock to these seas. There are ample opportunities to swim with schools of hammerhead sharks, whale sharks, and majestic rays or simply explore the region’s many underwater volcanic rock formations, which are home to countless tropical fish, turtles, and breathtaking coral atolls.

One of the most famous locations is certainly the famous Darwin Arch, a natural rock formation that attracts thousands of maritime species carried by strong currents and which gather at a depth of a few meters. These include a large number of sharks such as hammerhead, silk and blacktip sharks, and even whale sharks.

Unfortunately, due to erosion, the arch has recently collapsed, however, the two rocks on either side have remained and the site still attracts many divers.

Although not known for surfing or sunbathing, the Galapagos is home to a wide range of beautiful natural beaches, of all types and colors, from red, gold, and black, thanks to the unique volcanic origins of these islands. Beaches where it is not difficult to come across some animals such as the famous sea lions, which live here in the local colonies.

The Galapagos are famous not only for their expanses of powder-white sand and intense turquoise sea waters but also for their abundance of marine life near the coast, where you can meet from crabs to sea turtles, as well as a myriad of tropical coral reef fish.